back home » Knowledge Base » Convert FAT Hard-Disk To NTFS.

There are different types of file systems used in computer hard-disks; FAT16, FAT32, and NTFS are the most common and widely used file systems. However, NTFS is most recommended among them all because of its reliability, security, and compatibility with the modern operating systems, and it's efficiency with software of toady.

In this tutorial, you'll learn how to convert a hard-disk that already formatted into or use FAT16 or FAT32, to NTFS.

Before we do so, I'd like to explain what both file systems are, and what each is capable of, so you can have the perfect clue of choosing the right type that will favour your needs.

FAT meaning File Allocation Table was first created in the late 1970s for use on floppy disks. The industry saw its potentials and quickly upgraded, and started using it on hard-disks almost everywhere from DOS to Windows 9x in the early 1980s.

Although, NTFS has taken the lead in the industry since the Windows NT era, still the FAT and FAT32 file systems are being use widely, and are ideal for removable flash media used in consumer electronic devices like, Flash drives, Digital cameras, Media players, Memory sticks, and more.

The FAT16 and FAT32 file systems are also necessary, and required for hard-disk drives when operating system doesn't support NTFS, for example Windows 98 and below. They are also useful for floppy disks in the case you'll want to boot a computer, using a floppy disk to access data on a hard disk volume.

NTFS meaning New Technology File System was introduced by Microsoft in the year 1993 with Windows NT 3.1.

NTFS file system is much reliable, fast, and compatible with modern operating systems and softwares.

NTFS provides much security for network file sharing, which enable you easily, and individually restrict users access to files and folders on your system.

This means, you can allow or deny who to do what with files and folders. For example who can delete, modify, or view file only.

In this case you can allow user A an access to view file only, and deny him/her from other rights, while allowing user B an access to do everything with your files and or folders. [FAT is somehow crippled here].

To find out what type of file system your drive is using, you'll simply have to click on the start button of your operating system and select Computer, or double click the Computer icon on your desktop if available. This will open the windows explorer.

In the windows explorer, right-click on the drive you'll want to check it's file system, and select properties to open it's dialog box. See illustration below. 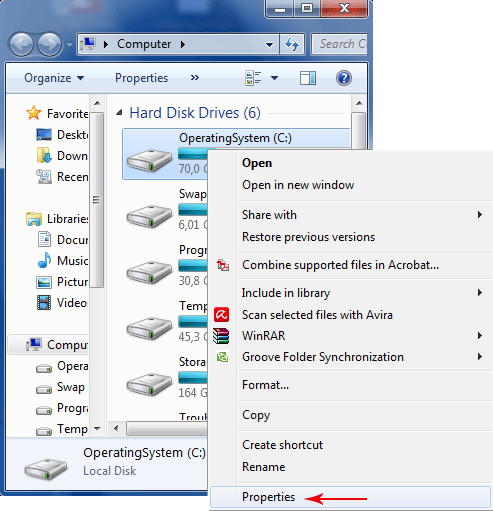 In the drive's properties dialog box's General tab, you'll find your file system on the line that reads, file system. See arrow below. 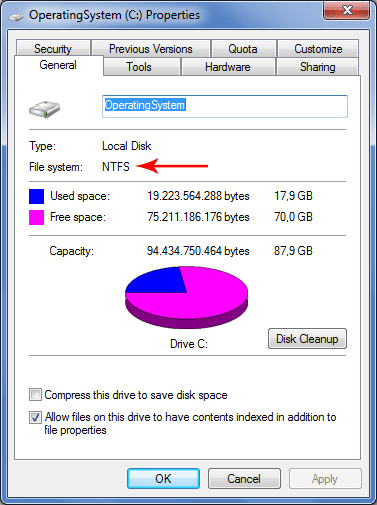 Let's say your Win XP operating system is installed on a partition formatted with FAT. Now you've realized the necessity of using NTFS and you'll like to convert the file system from FAT to NTFS.

You can use the convert.exe on the command prompt to achieve this easily without causing any error to your operating system or losing any data. [Even so it's always advisable to back up your files first].

After backing up your files, proceed to the following:

You can also use the shortcut, by simply typing CMD in the RUN field, and then hitting enter to open the command prompt. See illustration below. 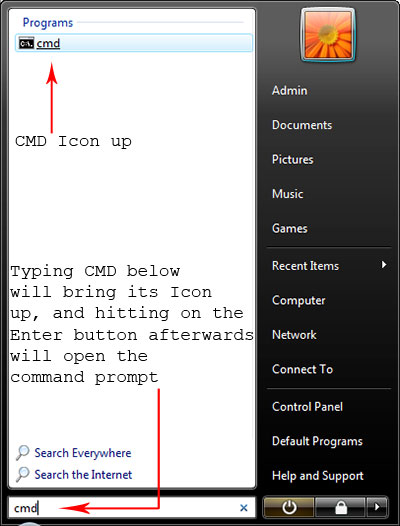 In the command prompt window type convert c: /fs:ntfs [See illustration below] and hit the Enter button. Now, follow the on-screen instruction to convert your file system to NTFS.

Note carefully: You should use the appropriate drive letter if C: is not the partition you'll want to convert. 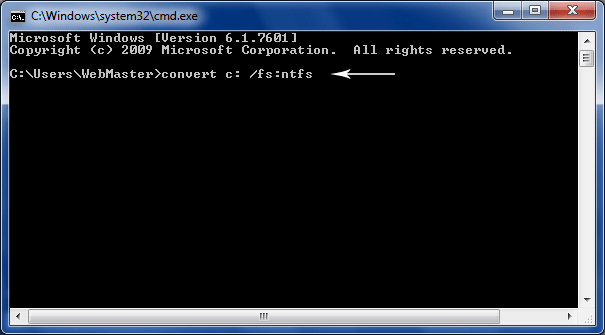 For detailed information on the convert.exe command, simply type help convert at the command prompt and hit the Enter button. See illustration below. 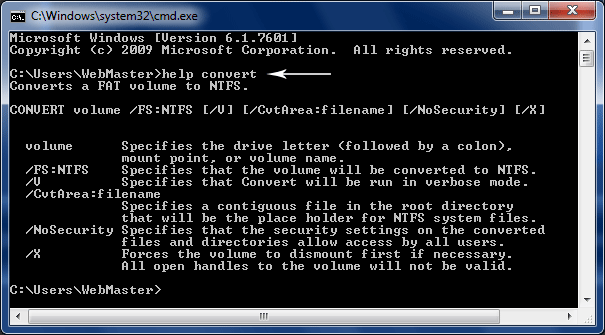 Man will give you worldly powers, and make you feel on top of all, note this is temporally and could be redrawn at anytime sending you back to the ground floor of life. However, the Lord Almighty, the one and the only rightful ruler of the Universe, blesses everlastingly.

Knowledge is Power, but Power is not Knowledge. Wisdom is the truthful Power that identifies the Knowledge within the man. And only, I repeat 3x. Only the almighty God has the power to bless the man with his Wisdom forever.

To achieve the Lord's blessings, cease not praying daily, asking for his Wisdom, and you'll be blessed abundantly...

Spyera Phone version is software that you install on a smart phone to monitor everything happening on the phone. After installation, SPYERA secretly records events (sms, call history, phone book, location, emails, What's App messages, IM, Facebook Chat, Skype, See photos taken and many more...) that happen on the phone and delivers these information to a web account, where you can view these reports 24/7 from any Internet enabled computer or mobile phone. SPYERA also allows you to listen to the surroundings of the target mobile , listen to the phone conversation and to know the location of the device.

Please, Kindly Donate What You Can, Enabling Us Pay Hosting And Domain Costing, And Do More.